If you’ve been following my blog, it’s no surprise to you that our son has a condition called Hydrocephalus. If this is the first post of mine you’ve ever read, you can also go back to previous posts to hear about Kai’s journey and learn a little more about what Hydrocephalus is and what the condition entails.

This is simply a celebration post, reflecting on 2018. As we enter a new year, it’s hard to not get caught up in the excitement of a “fresh start”. Even if you’re not one to make New Years Resolutions (as I’m typically not), there is just something refreshing about starting over, in a sense. But more importantly, I like taking the time at the beginning of a new year to reflect. I look back and remember all that I’ve accomplished and how much I’ve grown/changed.

In 2018, my husband and I decided we wanted to become more involved in the Hydrocephalus Association, a fundraising organization working to find a cure for this condition. As we learned more about the association, we decided to create a team for the Cincinnati WALK to End Hydrocephalus that we named Kai’s Krusaders. Now, we’ve known that we have the BEST tribe out there for some time now but looking back on all that we have accomplished, thanks to our support system, literally blows our minds. It not only confirms how amazing our tribe is but shows how BEYOND blessed us and Kai really are. So, here are some of the details.

On May 19, 2018, I created Kai’s Krusaders online fundraising page with the Cincinnati WALK to End Hydrocephalus. We asked for people to donate money to the cause, if they were able. More importantly, we asked people to come walk with us on October 14 to raise awareness and support Kai. We received our first donation (well, 12 donations to be exact) that same day I created the page. My original team goal I created was $3,000. After posting on social media, the link being shared several times over, we BLEW past our original goal. The best part, not only did we dominate our fundraising goal but we had 72 people sign up to come to Cincinnati (several travelling from out of town and from other states) just to walk with us!

As I began preparing for the walk, I decided to get t-shirts made for our team. Because I wanted them to be unique, being an artist, I drew Kai’s face and asked Mojo Sportswear to print my drawing on t-shirts! They looked ahhhhhmazing! My moms company, Cheer Force One, donated all of the shirts to the walkers, so they were at no cost to them, which was so very generous. But then I decided, hey… let’s not stop there. I decided to make the t-shirts a part of the fundraiser as well. I wanted to be able to offer them anyone, even those who weren’t able to make it to the walk. We were able to offer shirts to people not walking for $15 and each shirt raised another $9, that was donated to the Hydrocephalus Association. (Ps- there are like 3 of you who ordered shirts and still haven’t gotten them – LOL – I did NOT forget you and promise to send those out ASAP!!!) We sold 51 additional “non-walker” shirts that allowed us to donate another $459 to Kai’s Krusaders! At this point, I don’t have an exact number but I do know we were somewhere around $5,500. It was then that I decided to change our team goal to $5,600. (Which is still what shows online as the goal)

As October 14, 2018 approached, we headed to Cincinnati in the very wet, cold weather and joined all of our amazing friends and family to walk in Kai’s honor. By the time of the walk, we were the top fundraising team for the entire walk and had raised close to $8,000!!! (Once again, I don’t have the exact numbers well… because honestly I didn’t keep track and donations just kept rolling in…because y’all are AMAZING) Some of our friends and my wonderful husband arrived bright and early to help setup for the event. The rest of us rolled in later with babies and the necessary coffee. Danny and I were in awe. We both said if there wasn’t so much going on to distract us, we would have probably just stood there and cried, thinking about how truly loved our son really is. 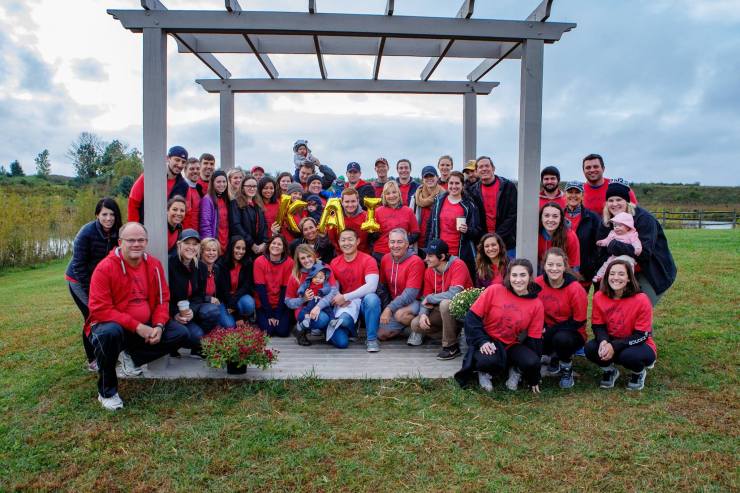 During the walk with our poster! 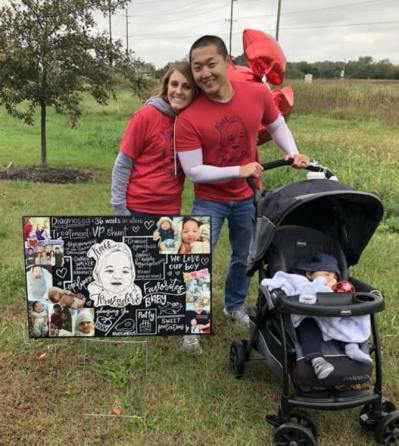 As to not drag this on any longer, let me get to my point. Which is pretty much how awesome you all are. After the walk, we learned that we could still donate online to Kai’s Krusaders through the end of the year. Kai’s first birthday was coming up in December and we knew we wanted to throw a large first birthday party but not just a party, a fundraiser/party. We invited over 300 people to the party (thank goodness my parents own a VERY large building that can house this large of a party) complete with bounce houses, food, games, a pinata and several raffle baskets/items. We asked our friends and family not to bring gifts for Kai (since this spoiled little boy already has every toy and outfit known to man) and to just either bring a donation or cash to participate in the raffle. I forgot to mention, our raffle items were also provided by our family and friends. We had over 25 different items to choose ranging from makeup, beauty products to pet products, Scott’s Miracle Gro products, Ohio State items and SO much more! Half of the baskets exceeded $150 in value! After Kai’s birthday party, the t-shirt fundraiser and the walk… we have raised…. DRUM ROLL PLEASE!

(yes… 2 cents. Thanks Dave. You’re funny.) Did you guys read that correctly? Because I seriously can’t even believe that. I read it and it gives me goosebumps all over again. All because of our sweet Kai, our amazingly generous family and friends who care so much and want to see him reach his maximum potential and an enormous amount of love, we were able to raise FOUR TIMES our original goal.  FOUR TIMES! (Spoken with emphasis like Monica on friends, “Four weeks baby, FOUR WEEKS! Please still marry me.” Any other Friends obsessed people out there? haha)

Call me crazy but I’m ready to do it all over again. Until there is a cure for Kai, I won’t stop. I’m not going to lie, that’s a HEFTY chunk of change and won’t be easy to beat. But I’ll be damned if I don’t at least try. So, as 2018 came to a close and our total was counted, it all gets donated to the foundation and we start back at zero. Our minds were blown when we read that number and 2019, we are coming for ya. We’re ready to make that look like pocket change. So, until HA says “we have a cure”, we will be back at and we are ready for Kai’s story to spread like wildfire.

To everyone who gave towards Kai in 2018, THANK YOU over and over. I can’t say enough how grateful we are for you. 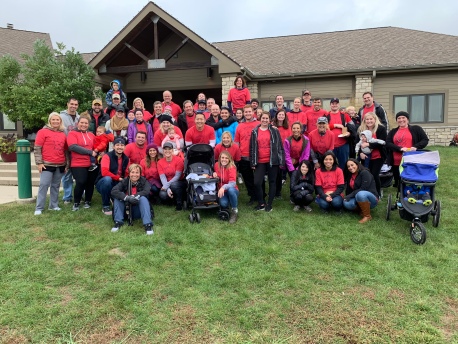 Happy New Year, all! Remember, it’s okay to be “unfine”.